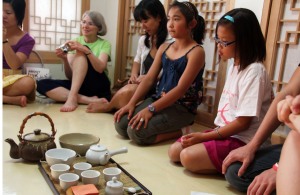 This has been our first full day in Seoul. Kyle was here in January and couldn’t say enough good things about it, but I had never given visiting much thought. I had many other places on my travel wish list, and the opportunity to stop over for three days at the end of our China adventure seemed like nothing more than a relaxing way to end the trip. I had no idea we would all be so enamored with it.

We began the day visiting Eastern Social Welfare Agency, which is the agency Dillon works with to place babies from Korea. Dillon also supports the many other services that Eastern provides to children and families in Korea. We tagged along with an adult adoptee group that has returned to Korea to learn about their birth country. It is a group of five young adult adoptees from all over the country who were placed by Dillon when they were babies. It was so much fun to spend the day with them. We also had an opportunity to be with families who have traveled here to receive their babies. They had that dazed and blissful look on their faces that we had on ours nine and a half years ago. We spent some time with the director of Eastern, Dr. Kim, and then accompanied the adoptees to a tea-making ceremony and painting class. From there, we hurried back to the hotel to change into nicer clothes for a dinner with Dr. Kim. It was a traditional Korean restaurant where we sat on the floor and were served a seven-course meal (it may have been more than seven course, but I lost count). The food was amazing –kimchi, bean paste soup, root salad, pork, shrimp, cold noodles – to name only a few courses. It was unlike anything we had in China (or in the U.S.) We loved the food and didn’t even mind sitting on the floor!

Tomorrow we visit the DMZ. I’m hoping to have good photos, but there are only certain places and moments where photos are allowed. Should be interesting.

We’re tired, but enjoying memories of a wonderful day. Tomorrow is our last full day of this amazing trip. It’s hard to believe. It’s flown by, but it also feels like months since we have been home. There is so much to think about and process. I’m ready to get home, but also not quite ready to end the adventure. All good things must come to a close, however, so tomorrow will be our closing day. We’re going to squeeze everything out of it that we can.