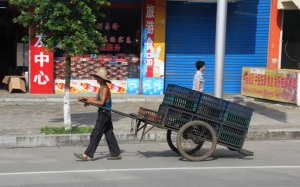 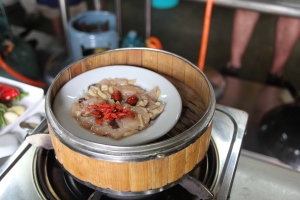 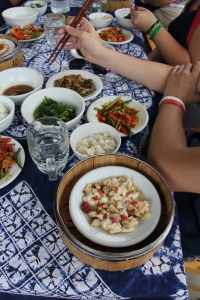 I have a very good excuse for not blogging last night. First, I’ll chronicle yesterday. We started early with a cooking class at the Yangshuo Cooking school in Chaolong Village, which is on the outskirts of Yongshuo. The school, although owned by an Australian woman, is real Chinese cuisine. Surprisingly, this was one of Colin’s favorite activities of our trip. Who knew? Our menu was three dishes made from scratch: stir-fried water spinach with garlic, stir-fried pork with vegetables (red pepper, carrots, and onions), egg-wrapped dumplings, a favorite snack of the village children (we used duck eggs and pork for filling), and steamed chicken with mushrooms. The prep and stir-fry took about an hour – each of us had our own wok and cooking area – and then we each enjoyed our created dishes. Delicious! We were all quite impressed with ourselves. It was hot and I’d like to say we are getting used to the heat and humidity, but it’s the kind that takes your breath away. Of course, we were sipping hot tea the entire time we were cooking. Tea is the anytime, everywhere drink. I’ve uploaded photos from our cooking adventure, as well as a few from around the village.

After we finished our lunch, we climbed on the bus for a two-hour ride back to Guilin to catch our flight to Beijing. No surprises – the plane was delayed by about 40 minutes. We were still due to get in to Beijing about 8:45 p.m., which was late, but acceptable. Our flight to Seoul was scheduled to leave at noon the next day. All was going fine as our plane cruised toward Beijing, and then a flight attendant made an announcement in Chinese. Our first hint of trouble should have been the collective response of the Chinese: they began to talk excitedly, laugh, and rustle around in their seats. The English version came next. We were being diverted to Zhengzhou because of bad weather in Beijing. And that was it. We would land in about 20 minutes, and they said they hoped we had enjoyed our flight. We wondered whether we would get another flight out tonight to Beijing once the weather cleared, or maybe we would be spending the night in the Zhengzhou airport. Hopefully it was modern and comfortable. When we landed on a strip surrounded by rice paddy, a wee bit of panic set in. There were no city lights anywhere that we could see. This was not good. We immediately called our Beijing guide, Vivian, who was supposed to meet us at the airport, and she did confirm that there was bad weather in Beijing, but said that it was clearing. We sat on the tarmac for about two hours with Rebecca making several calls to Vivian and handing the phone to the flight attendant so Vivian could find out what was going on. All the planes had been diverted from Beijing, so we were waiting in line to take off from Zhengzhou. We were relieved not to be staying there. Later, Vivian informed us that the city is the capital of Henan province – a very “traditional” Chinese province (translated, poor and backward). “Probably good you didn’t go there,” Vivian said.

We got into Beijing about 1 a.m. and to our hotel a little before 3 a.m. But we made our flight to Seoul today and we are so very glad to be here. We’re finishing the trip with a little family time in a nice hotel suite, complete with a kitchen and washer/dryer. Such luxury! We have several activities planned here, including a trip to the DMZ (the border of North and South Korea) on Friday. Tomorrow we will visit Eastern Social Welfare Agency where we will meet up with a group of Korean adoptees and tour the agency. We’ll also attend a tea-making ceremony and painting class tomorrow. By the end of the trip we should be experts on tea and art!

Seoul is very westernized, and so we enjoyed pizza and scones tonight. I’m actually tired of rice, which is something I never imagined. Everyone is still doing well. Tired, but glad to be saying….