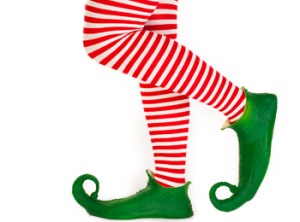 Santa has disappeared from our house. By that, I mean that we no longer have children who believe that Santa climbs down the chimney, delivers the gifts, and eats the cookies.

Here’s a secret: I’m a little bit happy about that.

Once the older two kids finally swallowed hard and accepted reality, it was hard to keep playing up Santa for the youngest. We were sloppy about it and slipped up so many times that I’m sure Alison’s been playing along since she was about five. When she was nine, about a month before Christmas, she sat with me in front of the fire and said, “Oh, just so you know, I don’t believe in Santa anymore. You don’t have to keep talking about him.” She never liked Santa. She was terrified of him that very first Christmas after we brought her home, and she has never warmed up to him. Not only did she adamantly refuse to sit in his lap, but she gave him the cold shoulder at parties. She was not interested in his candy, nor his invitations to “tell me what you want.” And then, there he was at the holiday parade the other night, the grand finale, waving to the adoring crowds. “I never cared much for him,” Alison stated. She should have gone ahead and finished her statement with, “I’m glad he’s out of my life.”

I miss the days of sneaking the gifts out and eating the cookies. Kyle always wrote a letter (as Santa). It was tradition.

So I’ve been mildly interested in the Elf on the Shelf phenomenon and wondered if we would have incorporated that tradition into our Santa ruse. It’s been around a few years, I know, but I’m a little slow on the uptake. So I went to the official website to learn about these watchful elves:

The tradition begins when Santa sends his scout elves out to Elf Adoption Centers. Waiting for their families to bring them home, these patient elves hibernate until their family reads The Elf on the Shelf, gives their elf a very special name, and registers their adoption online. Once named, each scout elf will receive its Christmas magic and become a part of the family’s Christmas each and every year.

Basically, these little adopted elves don’t stay on the shelf. They move around the house, making sure the kiddies are nice, not naughty. They record good deeds and tattle to Santa about the bad deeds…every night. Apparently, when you’re in your home, there is no escaping these elves. And I’m guessing they take their jobs quite seriously. So does Carol Aebersold and her daughters, the co-authors and CFO of the Elf on the Shelf corporation. The women have taken Christmas magic to new heights. “We’re ambassadors for Santa,” daughter Chanda says.

Now, I hesitate to go much further with this because I know many families who have little elves sliding around their house watching the kids and making reports. I haven’t talked with all of these children, but I suspect that this little game is enjoyable or else the Elf on the Shelf corporation would not be doing such a profitable business. (By the way, the Clause Couture Collection 2012 Elf Scout Skirt is sold out, in case you were wondering.) And I’m confident that at some point in our Santa tradition we would have given the elf a whirl at our house. In fact, we could have probably used something like this with unnamed eldest son. What better way to take the pressure off the all-consuming parental responsibility of making sure a child behaves than to shovel some of that off onto an innocent elf? I certainly got tired of being Santa’s eyes and ears. Children are forever asking, “How does Santa know if I’m being good?” And of course we had no other brilliant answer than, “Oh, he knows.” The elf, however, does the dirty work and makes sure that The Big Man knows.

But would the elf have worked with Alison? Not a chance. For a kid who had already written Santa off, an elf on the shelf would have been yet another reason to reject the jolly old man. Not only was Santa creepy, but now he had a mole.

Well, we’ll never be certain if the elf would have been welcomed into our home. Santa has left this building. But if things get ugly around here, I’m dusting a place off the mantle just in case we need to bring in back-up. You never know.