I’m never really sure what I am supposed to do on these days (Earth Day, World Cancer Day, World Mental Health Day, et. al). There is a day for everything, and to be honest I’ve never paid much attention to World AIDS Day. Why? Because AIDS had never hit close to home. I didn’t have a friend or family member die of AIDS, nor did I know anyone who is HIV-positive.

We’ll call her Mary. I can’t give you her real name or post her photo because she is a child. She lives in Africa where about 23 million other people are living with HIV/AIDS. Mary is beautiful and has a smile that belies her horrific childhood. We sponsor her through a wonderful organization that is making sure she receives her antiretroviral medicine every day, which, if continued, will give her a chance for a long life. Thank God. Only about half of the people who live with HIV/AIDS in Sub-Saharan Africa receive antiretrovirals, despite the fact that they are inexpensive ($100 for a year’s supply) and very easy to take (our girl pops a pill in her mouth every day and goes on to school). While the overall growth of the epidemic has plateaued in recent years and the number of new HIV infection has declined, the end of the tragedy is still far away. Meanwhile, entire countries in Africa are devastated by the disease, and millions of children are orphans because of it.

So it might be good to take just a moment on this day as I sit with my healthy daughter (who is about Mary’s age), and think about what AIDS is doing to families and children across the globe. It’s interesting that World AIDS Day falls on December 1, which is the day before Kyle will fly into Addis Ababa, Ethiopia. In a more distant way, AIDS also touched our lives here five years ago. During Kyle’s first trip to Ethiopia in 2007, he encountered a woman in a hut, lying on a bed while her sister quietly cried outside. The woman, bone thin and too weak to walk, was dying of AIDS. Kyle visited this woman with a group who regularly checked on the many AIDS victims outside a remote village to do what they could to ease the process of dying. 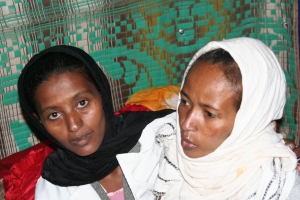 The woman, wrapped in white, could barely sit up, and when the group determined that it was time to get her to the village to find treatment for her, one of the workers loaded her on her back and began the trek into the village. 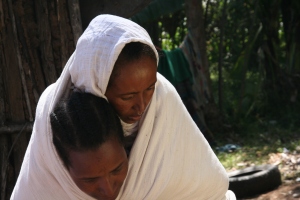 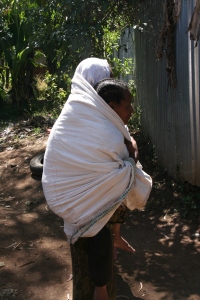 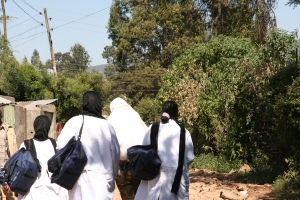 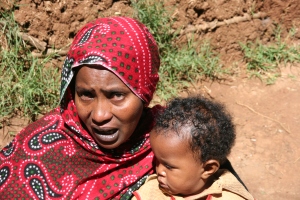 It was too late for the woman. She left behind a sobbing sister and a young child. This story is still repeated in places all over the world, but most often in Sub-Saharan Africa where the inexpensive treatment for HIV just doesn’t reach many of those who need it. What keeps these anti-retroviral drugs from the people who need them is a combination of many factors that I won’t go into here, but most of them aren’t anything that couldn’t be overcome if enough people stood up and echoed the statement: “Where you are born shouldn’t dictate whether you live or die.” Our own government helps provide these life-saving drugs to people in developing countries, but guess where big budget cuts will come in if we topple over The Fiscal Cliff. Many of us have enough worry about what cliff-falling will do here at home, but if you believe that we are to do justice everywhere, not just in our own backyard, then it should matter that the cuts will take away life-saving drugs from people who need them. You can read an excellent summary (in layperson language) of budget cuts in this article and how they will affect the aid our government provides to the world’s poorest. Oh, and in case you’re worried that our government has been throwing a lot of money at global aid problems and you’re of the opinion we should be spending that money here at home, the money we give to these much-needed world aid programs only comprises .75 percent of the overall U.S. federal budget. Don’t worry, we’re not being too generous.

If I had not seen the faces of these women and our girl Mary (by the way, 6 out of 10 HIV-positive people in Sub-Saharan Africa are women), then this day might slide past me without notice. But I’m noticing, remembering, and taking action. I’m also praying that Mary’s antiretroviral drugs will still be accessible to her if the worst happens and our government, and other governments, make deep cuts to global aid. Suddenly, these things matter. And World AIDS Day makes sense.

Guess what? Your voice is powerful. Somehow we think that we’ve lost our ability to be heard by our leaders, but that isn’t true. We elected them. They listen. Here’s an easy way to let your voice be heard. Go here. It’s the ONE campaign website where you can sign a petition that will be delivered to your congressman and it says this:

Dear Congress: Protect our investment in life-saving development programs, such as those that fight HIV/AIDS, childhood diseases, and hunger, by preserving the International Affairs account.

It takes about 15 seconds unless you type dreadfully slow, and then you might add another five seconds. If you aren’t affected by the AIDS epidemic, say a quick prayer of thanks, and then do something for the millions – most of them “the least of these” – who are.