I met an artist in Kumasi, Ghana who sells his work on the street. We were shopping for items to take back to Dillon’s Lunar New Year fundraiser, but I was open to buying a little something for myself. After a small amount of price negotiating with this very motivated artist, I purchased a beautiful painting of an African mother and child. It’s too expensive to frame (maybe someday), but I am still proud of it and bring it down from the upstairs gameroom pool table to show people every now and then. About four days after I met the artist, Emmanuel, I was in the lobby of the hotel praying over my Wi-fi connection and who do you think walked in the door with an armload of art? What a small African world it is. A group of college students and their adult chaperones from the U.S. had descended on our peaceful Miklin Hotel the previous day and Emmanuel and his artist buddies had gotten word. They were there to sell.

We immediately recognized each other and he sat down beside me and listened to me whine about the Wi-fi connection for a while. Then he said, “Have you ever seen string art?” My mind immediately flashed an image of the old kids’ craft yarn art, and I nodded. “I think so.”

As it turns out, I had never seen string art. This is what he was talking about: 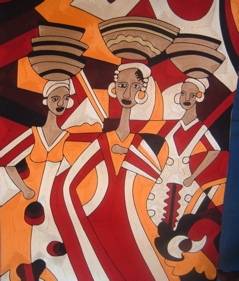 It’s a very specific type of art that takes skill and practice. The craft is handed down to an artist from an apprentice (in Emmanuel’s case, his grandfather). Each piece takes about four to six weeks to complete. The artist first sketches a figure onto canvas, then traces over the figure. The canvas is glued multiple times, and then the process to complete the artwork begins by hand weaving the details toward the right-hand side, one after the other. Details and background are woven into the canvas with colored silk thread and the artist must give careful attention to maintain color consistency throughout. The colors that are used to dye the thread are created from plants, which are cooked for days over a very hot fire. This craft originated and remains mostly in Ghana and Nigeria. I was immediately taken in by string art, but I was out of funds and space in the suitcase so I shook my head at Emmanuel’s offer to sell me a piece. In Ghana, people love to exchange phone numbers and email, so I gave Emmanuel my card when he asked for my contact information. The next day we boarded a plane for home and I didn’t think about our exchange again until I received a phone call from him about two months later. He wanted to send me some string art to sell. I really hate it when I’m skeptical about people, but I assumed that he was simply asking me to send him money and he would send me a piece of art.

“I can’t buy anything Emmanuel,” I said, yelling into my cell phone, which is what you do when there is an enormous language barrier. We were on the phone for at least 30 minutes as he explained to me about his art, his dreams of having an art studio and eventually an art school. And he kept asking if he could send me art.

“Please don’t use your money to ship me art,” I yelled. “There isn’t a guarantee that it will sell and it would cost us both money because I would have to ship it back.”

“Just keep it until you see me again,” he yelled back.

That made no sense, so I ended the conversation politely. Why would he spend the money to send the art over and then trust me to return it to him? Then the emails from him began to pop into my inbox, with the same request.

And for about a month he asked to send me art and I gave him a lot of reasons why he shouldn’t. Then, after tiring of his pleas I said, “If it’s what you really want to do, then it’s up to you.” Apparently that was the equivalent of shouting, “Send me six pieces of art!” 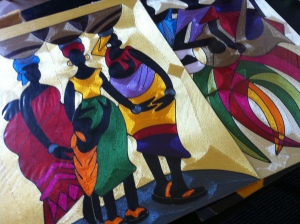 With the string art in my possession, I immediately phoned my cousin who works for Tulsa’s Arts and Humanities Council. It was an SOS call. “I have this art,” I told her. “And I don’t know people who buy art.” A few days later we met so she could take the art into her possession. She knows people who buy art. By the end of the day she had sold a piece and by the end of the evening she had arranged to have the pieces in an art auction the following night. Which is how Emmanuel, who was still back on the streets in Kumasi trying to sell his art, ended up being featured in an art auction in Tulsa, Oklahoma. And he had no idea. I didn’t want to get his hopes up so I didn’t tell him his art was being auctioned at a fancy event. We attended the auction because this story was just way too good and we wanted to be right in the middle of it. 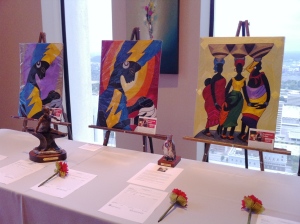 Every story does not have a predictable ending and you’re probably expecting this one to end with a big finish. No, we didn’t make big money at the art auction, but it was first-year event and most people came to window-shop. I stood at the table for a while and watched as people walked up, stared at the pieces, and declared that they had never seen anything like it. After I explained the process they were amazed, so I believe Emmanuel might have a possible future as an artist here in the U.S. But he isn’t here. He’s still in Kumasi peddling his beautiful art on a crowded Ghanaian street to people who don’t have the money to buy it.

There is a fabulous ending to this story, but I’m not sure what it is yet. In the meantime, if you would like to buy a piece of authentic African art that is like nothing most people have ever seen, I’m selling.

5 thoughts on “The Art Auction: How Did We End Up Here?”