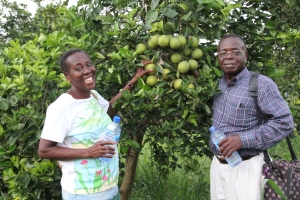 Guess what? Tonight, Chelsea beat Bayern Munich 4-3 in a penalty shootout to win the Champions League trophy. Do you care? Everyone in Ghana does. And now Erin and I are caught up in it and we don’t know even watch soccer (just like almost every other adult in the United States). We’re trying to figure out why the rest of the world loves soccer and why people in the U.S. only love it until they’re about 14. But tonight, we’re cheering along with the city of Kumasi. We attended a birthday party for Peter’s friend who turned 85 years old, and finally, we ate traditional Ghanaian food in a traditional Ghanaian home. The family was so gracious to us, which we have realized is the Ghanaian way. As an example: as we shopped this afternoon, each market vendor gave us a free gift AFTER we haggled the price down. About halfway through our shopping excursion, I stopped the game of going back and forth and paid what they asked. It seemed ridiculous in a country of extreme poverty to try and get our stuff on the cheap. And then to receive a free gift. For what? No. We’ll pay the asking price.

At the birthday party, after the well-wishes and three long group participation prayers, the men disappeared. And on our way home from an afternoon of shopping and the birthday party, every market stall we passed had a television on and a crowd of men sitting or standing in front of it. The streets were almost deserted, but each time Chelsea scored a goal, the entire city roared. Yes, folks, this is football in the rest of the world. Somehow, we joined the bandwagon and cheered for Chelsea although I don’t know the first thing about this team (now I know they wear blue and white and their owner is based in Moscow). For tonight, we are big fans.

Our host, Peter (in the bottom photo above with his wife Anna) grumbles about the football. “Why,” he asks, “in a country where people need to be learning and studying so we can better ourselves, are people so caught up in football? Why are they wasting their time with this? I want to know what the big deal is.” He might be the only man in Ghana who doesn’t care about this football game. Maybe in a country of people who struggle for enough money to feed themselves and their family every day, the excitement of football is a welcome diversion. I felt a sense of hope as we passed through the streets of Kumasi tonight. So what if it was a hope that a football team in a London borough might win a championship league game? It was hope. Anticipation. Joy. Celebration. And it’s still going on and the game has been over for about an hour. There is a party right outside our window in the courtyard of the hotel and I plan to lay awake tonight and listen to the laughter and the music and feel the hope along with everyone else. I would join the party but I’m white and I can’t dance.

Not only was today a big day for the football game, but Saturdays are funeral days. As we passed through several areas of the city, we saw people dressed in their fancy funeral clothing – dark shiny dresses, usually black, red, or a combination of both (center photo above). The deceased isn’t buried until about six months after death to give time for family members to make travel plans and save up to make the trip. All the family is expected to attend and the services are long and emotional, as is the celebration that follows. It’s a celebration of the person’s life, and the attendees live it up in their honor. “No one is on the streets tonight,” Peter said as we were driving home, “because they are either watching the game or passed out from the funeral celebration.” Whatever the reason, we made it home in record time.

We’re holding up well. Africa is soaking into us (more about that later). So once again, we wish you a good night from Kumasi, Ghana.

2 thoughts on “Ghana Day Five: A Day of Celebration”