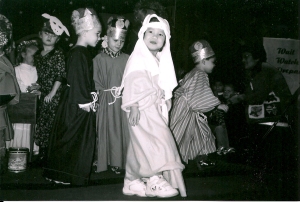 When Alison was in her first Christmas pageant she was chosen to portray the mute and blessed Mary. I was so proud my daughter had landed such a plum role. Mary!  I helped her practice her serene gaze of love and told her to smile at Joseph every now and then. “Walk in slowly,” I instructed her. “And don’t worry about the audience…you know, all the mommies and daddies out there. Just pretend you’re Mary.”

I went to the pageant with a loaded camera, ready to document the beauty of it all so that we could look back on it in years to come and remember what a plum role Alison had landed. Mary! The nativity actors walked in wearing miniature Bible-era costumes and a few bathrobes. Alison was wearing a pink bathrobe, which bothered me a little. I don’t think Mary wore anything that resembled a pink bathrobe, but I shrugged it off and poised my camera. The children were waving at the mommies and the daddies, but Alison was following my instruction not to worry about the audience. Her eyes were fixed on the manger. I wanted to get a good picture of her with Joseph, the shepherds, and the wise men all kneeling before baby Jesus. What a great image for a homemade Christmas card! Friends and family could see what a plum role Alison had landed.

The children shuffled around to the back of the manger and looked down at the plastic doll wrapped in a white baby blanket – all except Alison and Joseph. They weren’t budging. They stood with their back to the audience – and my camera – the entire pageant. The preschool teachers kept making subtle arm gestures for them to circle around to the other side of the manger, but it did no good. Finally, when they were taking a bow, Joseph turned around and gave Alison an elbow in the ribs to join him, but the moment had passed.

I was going to say something to Alison after the pageant because I thought if she ever wanted to land a plum role like this again, she better get straight what it is that Mary is supposed to do. But I decided against it. Alison had played the part exactly as it should be: Mary staring at the Son of God – her baby boy – and ignoring the audience.

The Nativity that we set on top of our piano during the Christmas season has become such a part of the holiday décor that no one seems to notice it anymore. This year  I’m considering turning Mary around to face the baby in the manger, and if anyone says anything I will tell them that I am trying to remind myself what I am supposed to be doing during Advent.

The arrival of something – or someone –  wonderful makes our heart pound a little faster and our breath shorten a little. We feel exhilarated, fresh and filled with new hope. I have a difficult time getting to that place during the holiday season. My anticipation mostly revolves around taking the Christmas card picture, entertaining houseguests, shopping, buying, wrapping, and watching the kids on Christmas morning. Somewhere in the middle of the racket I forget that the One we are waiting for is the Savior who opened the door to heaven the moment he emerged from the earthly womb. It seems to be a large truth lost in the small reality of seasonal rituals. I keep looking at the audience and forgetting to turn around and focus on the manger.

“So hallowed and so gracious is the time,” says Shakespeare of the celebration of Christ’s birth. Turning around to face the manger seems the very least I could do during this Advent season as I wait and anticipate the arrival of God clothed in human skin.

2 thoughts on “Advent Week One: The Manger Scene”